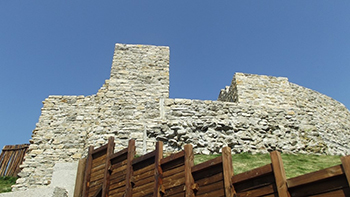 The "Ledenika" (“Ice”) Cave is located in the Northwest part of Vratsa Mountain, 16 km from the town Vratsa. The cave is a recognized national landmark since 1963 and is the most visited Bulgarian public cave. Its entrance is situated at altitude of 830 m. The cave is about 300 m long and has ten rooms, with the largest one - "Concert Hall" having the impressive dimensions of 60 m by 45 m in plan and 23 m in height. The temperature in the cave ranges from - 10 °C to + 8 °C and the relative humidity is above 90%.

After the "Lobby" room follows the "Drag" room until the round-shaped "Little Room" is reached. After squeezing through the next narrow passage, the "Concert Hall" room is reached. The floors of these rooms are covered in ice, the walls are sprinkled with frost and whole frozen waterfalls have formed, icicles with bizarre shapes hang from the ceiling. Тhe enormous ice column, located in "Lobby" room is quite impressive too.

As anywhere in the world this ice cave too provokes the imagination, and every visitor can see natural ice-sculpted forms: cups, bottles, trees, a crocodile, a falcon, a giant, even Santa Claus and the house of Baba Yaga. The unique "Concert Hall" has perfect (ice-)acoustics and there often perform concerts. These underground concerts are short, but not because of cool air rather than high humidity, harmfully affecting the instruments.

Visit this link to get a feeling of the "Ledenika" cave. You can enjoy а short concert in the cave - here.

The archaeological complex "Kaleto” (The Fortress) is situated 30 km from the "Ledenika" cave and it holds 70 centuries of history. It is located at a major roads intersection used since ancient times to this day.

“Kaleto” was built on a high rocky ridge providing its natural protection. The two fortified craftsman settlements that existed on site by the end of the Copper Age (5th millennium BC) and during the Bronze Age (4th millennium BC) are both presented in the complex. The site was inhabited by Thracian tribe "Tribals", after which it was captured and ruled by the Roman Empire. In IX-XI century the Bulgarians of Asparuh established a Bulgarian settlement. The castle and the village were captured by the Byzantine Empire in the eleventh century, when Emperor Basil II conquered the north-western Bulgarian lands.

On display at the “Kaleto” are a Roman fort from the middle of the II century, a pagan cult center of the III century and a fortified settlement from the IV-VI century. The exhibition hall tells about the centuries-old history of the village and presents the life of the people who inhabited this place from antiquity to the Middle Ages. There are archaeological finds, unique items and the artefacts of 5 different historical periods - many bronze coins, silver and bronze ornaments and a bronze cast of an eagle - one of the earliest examples of the symbol of the Roman Empire. The newfound "Sanctuary of the Aurochs," (Aurochs - the most famous extinct animal in Europe) has high archaeological value and significance. Ancients believed that this pagan deity propped the world by his horns.

You can visit the site of the archaeological complex "Kaleto" - here, and watch a brief presentation - here.